Our all new Inner West Map tote bag, on it you'll find some of the most Iconic Inner West buildings - some still open and in business, and some from a memorable by-gone era! We feature the pretty in pink, 'Marie Louise Salon' on Enmore Rd, Enmore which was owned by a brother and sister duo: Nola and George Mezher. We have heard on the grapevine from previous customers of the salon that one of Nola's friends, who was a hair model in the 70's would sit in the window of the salon reading a magazine, whilst Nola worked on her hair! Such fun and flirty advertising - we love hearing stories like this!

We also feature 'The Imperial Hotel' on Erskineville Rd, Erskineville a hotspot for the past 13yrs for the LGBTI community which has recently been closed but will be reopened again! The 'Rio Milkbar' in Summer Hill that was owned by George Poulos for a whopping 63 yrs, where he made milkshakes in a shirt and tie everyday without fail! We also feature the famous white building with red and white font on the corner of Canal Rd and Princess Highway. Yes, that's right, you guessed it the 'Dynamo Auto Electrician' a family run business who have been operating for almost 50yrs! Of course we also get in there the, 'Oxford Tavern' notorious for its reputation as a saucy pub (and I don't mean tomato sauce!) once know for its topless barmaids, exotic strippers and those neon lights - the bar has undergone a makeover and transformed into a Southern Style urban pub, with funky cocktails! And of course, how could we not include, 'Made590' itself.

This one is featured on a red base. All designed and digitally printed locally, in Australia. 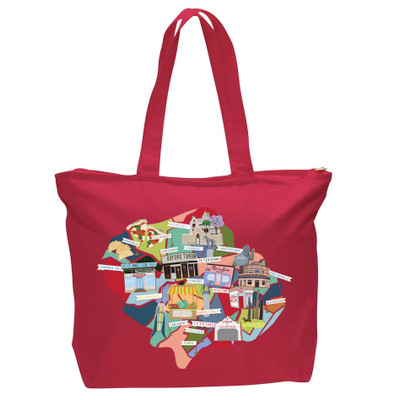 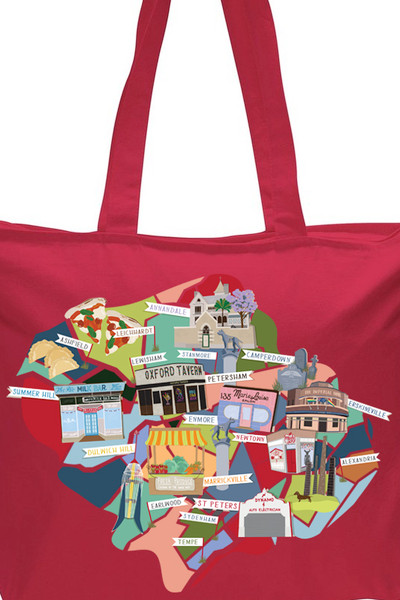