We've been super busy here at Made590 working away on lots of new things for you all - and the latest product we've been working away on pays tribute to the much loved, extravagant and eccentric 'David Bowie'.

English Bull Terrier - Perriot/ Clown: The Blue Clown — Bowie ushered in 1980 by taking his glam rock fashion stylings and going fully operatic with them. The Blue Clown, or Pierrot, was an outfit made for Bowie by costume designer Natasha Korniloff for his "Ashes to Ashes" video, and was also used on the cover of Scary Monsters (And Super Creeps).

Frenchie - Ziggy Stardust eyepatch : The Eyepatch — David Bowie's Ziggy Stardust eyepatch is one of his most iconic looks, but its creation was actually an accident. According to Bowie himself, he wore the eyepatch for the first time during an interview simply because of a bout of conjunctivitis he came down with shortly before an interview. He looked so good in it, he decided to go full-on space pirate with the rest of his outfit.

Border Collie - Goblin King: The Goblin King — What mention of David Bowie's iconic looks would be complete without mention of his turn as Jareth, the evil Goblin King from Jim Henson's Labyrinth? Fantasy designer Brian Froud designed Jareth's look in the film, saying he drew on inspirations such as Marlon Brando in The Wild One and vivid scenes from Brothers Grimm fairy tales, like the knight "with the worms of death eating through his armor.

All designed and digitally printed locally, in Australia. This one comes on an asphalt base. 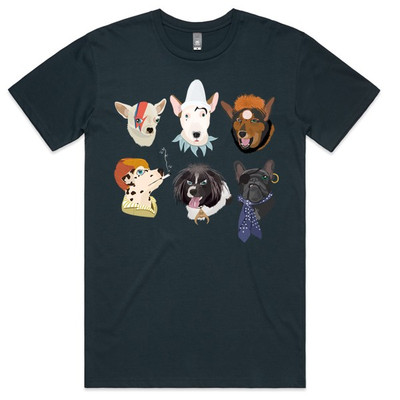 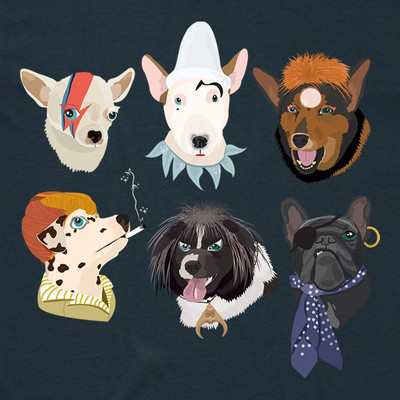 Please be aware that the measurements above are a guide only.

Actual garment may vary as all garments are handmade.