If you thought you loved our original Inner West Icons print, you’ll be over the moon when you see what our talented, in house graphic designer Kirbee Lawler has been working on. And to top it off, it is available in our popular blindwear mens tees after much demand!

You'll find some of the most Iconic Inner West buildings - some still open and in business, and some from a memorable by-gone era! We feature the pretty in pink, 'Marie Louise Salon' on Enmore Rd, Enmore which was owned by a brother and sister duo: Nola and George Mezher. We have heard on the grapevine from previous customers of the salon that one of Nola's friends, who was a hair model in the 70's, would sit in the window of the salon reading a magazine, whilst Nola worked on her hair! Such fun and flirty advertising - we love hearing stories like this! Now transformed into the casual fine dining Turkish restaurant, ‘Stanbuli’ with all exterior aesthetics still honoured and in original condition.
We also feature 'The Imperial Hotel' on Erskineville Rd, Erskineville a hotspot for the past 13yrs for the LGBTI community that was recently closed but has now now reopened screaming acceptance, unity and equality!

The 'Rio Milkbar' in Summer Hill that was owned by George Poulos for a whopping 63 yrs, where he made milkshakes in a shirt and tie everyday without fail! We also feature the famous white building with red and white font on the corner of Canal Rd and Princess Highway. Yes, that's right, you guessed it, the 'Dynamo Auto Electrician' a family run business that have been operating for almost 50yrs! Of course we also get in there the, 'Oxford Tavern' notorious for its reputation as a saucy pub (and I don't mean tomato sauce!) once know for its topless barmaids, exotic strippers and those neon lights - the bar has undergone a makeover and transformed into a Southern Style urban pub, with funky cocktails!

How could we go past an inner West t-shirt, without featuring the award winning family owned, ‘Cow and the Moon’ gelato shop. Located on Enmore Road, they’re known for their world’s best ‘affogato’ flavour – yes you read that right - they placed number one in the world for their affogato ice cream with caramelised almonds sourced from Italy with Madagascan vanilla base.

Other icons we couldn’t go past include the uber cool and hip Mary’s burgers known for their craft beer and American style burgers with super soft buns, beef patties and a whole lot of melted cheese - we call it the adult version of McDonald’s flavours. A rock ‘n’ roll vibe with slaytanic font on the menus, an ode to thrash metal – which is on high rotation; think Slayer, Metallica, Megadeath, Pantera and Machine head – overall an eclectic music selection, timber décor with a people queuing all through to the mezzanine.

Blokes with beards and filled to the brim growlers. Yep, the ‘Young Henry’s’ Brewery in Enmore has been instrumental in creating a new and revamped bar scene in Sydney; and also a pretty hipster vibe on the streets with growlers in tow. With a low impact environmental philosophy, having a night out can be spent guilt free – more or less! Young Henry’s encourage reusing their glass growlers to avoid waste, this also means you can get it filled straight from the brewery meaning this is a s fresh as it gets.

A favourite of mine is the reusable teal coffee cup with the salmon lid. Coffee culture is one of the main contenders for the Inner West gaining its popularity. With a coffee shop on every corner, you’re never short of places to try. The Inner West community has been influential in trying to minimise plastic consumption though, so you’ll see a lot of reusable takeaway coffee cups in customized colours and variations on the streets!

How could we not include our neighbouring pub ‘The Union Hotel’, with a fresh, new look. Known for its craft beers on tap, it welcomes people near and far for a traditional, casual pub experience or a more restaurant feel with the cocktail lounges outback and moody lighting. Or spend some time in the Beer Garden on a hot summer’s afternoon. The Union is often called an institution as it symbolizes everything the Inner West is known for – a melting pot of different walks of life, a larger community that accepts one another, and welcomes diversity.

To finish off we have the ‘Save the Inner West’ – West Connex signs. The Inner West is known for its protests, voicing community issues through street protests - we generally have a pretty ‘activist’ approach especially when our local community is at threat. Over 800 trees at our local Sydney Park have already been chopped down to make way for the 33km toll road ‘West Connex’ project that have taken peoples homes, our local parkland and green spaces.

FEATURES: Made on a army base perfect to wear both dressy and casual! The map itself is a greyscale, with loads of inner west building references and suburb typography including. What's your favourite thing about the Inner West?! The perfect gift for an Inner Westie and for those who love the Inner West!

SIZING: Available in sizes S-XL, these tees are a bigger make than the old Blindwear tees, so please check your measurements to ensure the perfect fit!

All digitally printed and designed locally, in Australia. 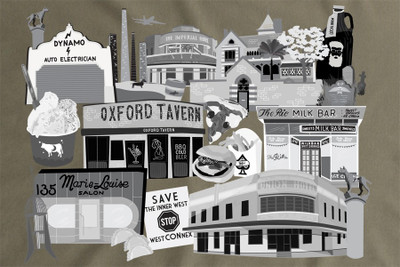